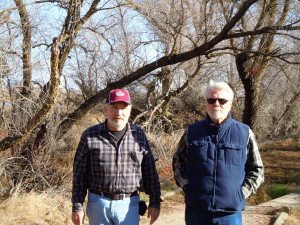 I was fat and forty, out of shape. My family was staying at the MGM Grand Hotel in Reno. The suite was decorated in mostly Red Gauche.  The rooms had mirrors on every wall and ceiling. Leaving the shower, I happened to notice my rear view – a white slab, a beached whale, a pale monolith. That was it. I recruited my friend Larry Corcoran, a lifetime track athlete to be my coach. Within three months I could run three miles nonstop (5 kilometers) at a blistering nine minute per mile pace. I was ready for the big stage. Larry referred me to George Sheehan’s great book Running and Being which is instructional, inspirational, and transcends running.

My first organized run (notice I didn’t call it a race) was the Bay to Breakers in San Francisco. This is an eight-mile run attended by tens of thousands. Hundreds of thousands more line the streets to cheer the athletes on and look at the funny costumes. At about mile four, the cheering throngs gave me a jolt of adrenaline. I now knew what it must feel like to be a professional athlete with adoring fans.

There were about five or six of us who participated in 5k, 10k and half marathons. I noticed that all of my comrades weighed in at around 200 pounds, plus or minus (mostly plus). With my keen powers of observation, I discerned that we outweighed most of the runners by at least 50 pounds. I concluded that we probably would not be competitive. So I reframed the problem. Our goals would not be to win, but to achieve other noteworthy endeavors:

Hugh Heffner talks about the Playboy Philosophy. Over the years the Fat Boy consciousness evolved. The following are some of the interests, attributes, and orientations of the Fat Boys.

All decisions are accomplished by only two methods – unanimous, or the individual who cares the most.

Fat Boys are usually recruited. One can apply, but the screening process is rigorous. However, anyone can request and get – for free –  a color Fat Boy Racing Team Goals document, suitable for framing.

This stands for Fat Boys in Front of Stuff. We memorialize most of our outings with photographs of us…in front of stuff. Notice photos on my web site, www.straightaheadmanagement.com. Notice also Fat Boy Bruce B. Hancock’s fabulous paintings.

In reflecting on the evolution of the Fat Boys, it has occurred to me that those goals aren’t bad for life in general: Finish; Don’t be last; Look good at the end; Don’t throw up; Eschew cardiac incident.