It is the latter that inspired the idea for this article: THAT CAR MAKES ME SMILE. It even makes my wife smile, and she can’t distinguish a Porsche from a Chrysler. Why is it smile-worthy? Because it is bright, bright yellow – bow to stern. Even the bumpers are yellow. Chris recently had it restored, and now it is brighter (yellow) than ever. He drives up, I see it, and a spontaneous smile comes over my face, and lasts until it is out of sight.

How do cars relate to depression? When one is in the grip of depression, dysphoria often settles in. This means lack of joy. As therapists, in addition to pharmacological treatments, we encourage patients to participate – on a daily basis – in pleasurable activities. This can be difficult because to the depression sufferer, formerly pleasurable things are no longer pleasurable; a good meal, good friends, salsa dancing, sex, or nice cars.

The good news is there is a plethora of passive pleasurable experiences that requires no effort whatsoever. Obviously, what makes one person smile may not evoke a similar reaction from someone else. Here is a list of smile makers for Yours Truly: hearing my daughter’s voice on the phone from New York (a daily occurrence); listening to humorous anecdotes from Kruk and Kuip on the San Francisco Giants baseball broadcasts; six to twelve month-old babies, especially really round ones; bellying up to the bar at Logan’s Roadhouse with my two best friends; riding my motorcycle, listening to my wife’s Puerto Rican accent.

What makes you smile? Can you make a list of such things? When depressed you may not be able to think of any. If so, carry a notepad with you, or the smart phone list making  app, and make a note of any spontaneous smiling. It takes many more muscles to form a smile than a frown. Thus, even the act of smiling forces motion from an often inert sufferer.

Some of the items that make my patients smile include happy people, playing with their grandchildren, walking in the park, sitting in the garden, music, the ocean, bay, lake, river, pond; the smell of freshly cut lawn, eucalyptus, and children playing.

Wild geese that fly with the moon on their wings

When the dog bites,

When the bee stings,

I simply remember my favorite things,

And then I don’t feel so bad.

I don’t think Rodgers and Hammerstein were therapists, but they’re really onto something there. By the way, my favorite recording of My Favorite Things is by Barbra Streisand. She owns it. Her fabulous voice, pacing, volume control and mastery of both the melody and the lyrics are exquisite. Makes me smile.

A Catholic priest friend of mine once said, “We have to accept life’s crap, but we don’t have to wallow in it.” Let’s quit wallowing and go on a treasure hunt together. We will mine for smiles. If it doesn’t work, come to my house and I’ll have Chris bring over his yellow Oldsmobile. 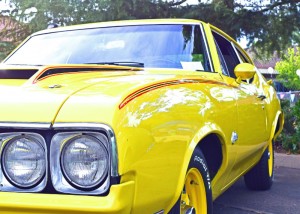